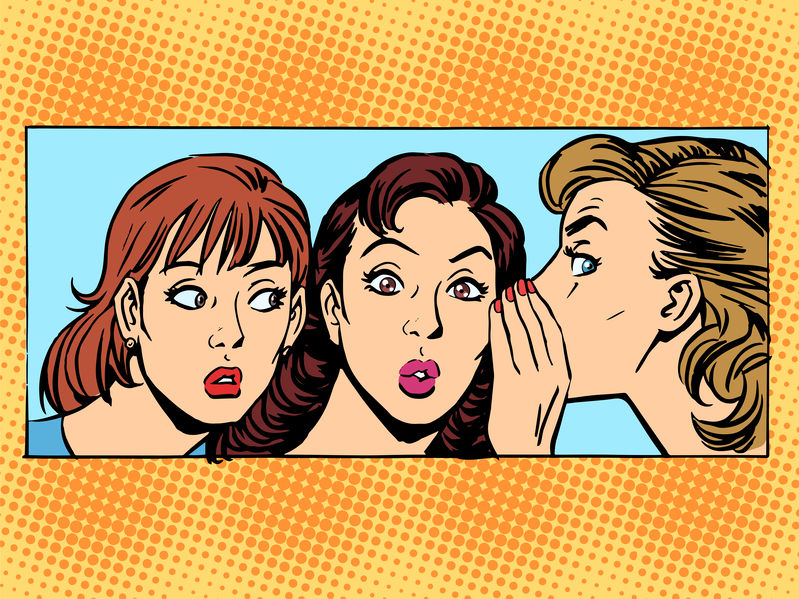 When I talk to parents, this part of my questioning often surprises them—and opens their eyes. How much do you gossip? Most people think they’re not into gossiping, but if you really take time to examine your own behavior, you may surprise yourself. Do you talk to your sister on the phone and tell her about Aunt Kristina’s divorce? Do you talk to your neighbor about other neighbors? Do you tell your mom about the stupid things your inlaws do, or your husband about your coworker who you wish would get fired?

We all do, to some degree. It’s part of normal conversation. And what we’re really teaching our kids when we do it is that it’s perfectly okay to say nasty things behind people’s backs. Young kids can’t differentiate and understand that you’re not supposed to say certain things in front of people—hence the ever-embarrassing moments when a child blurts out something to a dinner guest that you said earlier.

In my neighborhood, one kid told another, “My dad says that your dad is a schmuck,” and we all tried to figure out for the next ten minutes or so what the word “schmuck” meant—until the second kid told his dad what had been said about him and asked for an explanation of the word.

Their hurtful “teasing” may actually be an emulation of the kind of gossip they see you do. If you regale your husband with a story of how stupid that cashier was today, don’t be shocked when your child begins calling kids “stupid,” and believing that kids who aren’t as smart as other kids deserve to be put down. Young children who know curse words and use them when speaking about others have learned them from places outside of their children’s books, so be aware: they are probably learning those words from home.

When I visited a friend a few months ago, she stopped to take a phone call. It sounded like she was talking to a dear family member. “How are you? It’s great to hear from you!” All sweetness and light. The moment she hung up the phone, in front of her daughter and me and everyone else in the room, she said, “I can’t stand that bitch.”

What lesson has she just imparted on her daughter? It’s okay to be two-faced.

As children move into the preadolescent and adolescent years, they’ll take gossip to a whole new level. It’s very difficult to teach kids (girls, in particular) not to gossip when they hear their parents gossip about family members, friends, and neighbors. Parents usually don’t think of what they’re doing as gossip, but the moment you begin saying something about a person that you wouldn’t want that person to hear, it’s probably gossip. This includes the “So how long do you think it’ll last?” comments at a person’s wedding, the “How did so-and-so get a promotion?” comments at work, and so on.

Become aware of how often you participate in discussions like this, and how often your children are within earshot. This is a constant challenge in our own lives when we speak about others and end up putting out information that may have been said behind their backs, even if it was not to hurt their feelings.

Girls, especially, are conditioned early not to speak directly. They’re taught to be good and sweet, stifle confrontational feelings, and mask their aggression, so starting as early as age three, they often show signs of relational bullying. It’s socially more “feminine” for them to ignore and whisper and roll their eyes, rather than actually approach someone and talk out a problem. Be mindful of this tendency and make sure you’re teaching your children about healthy communication. The question is, are you using healthy communication in your own relationships?

Healthy communication has to do with teaching your kids how to be direct with each other. Try to role-model this in your own life with those adults that you feel you need to be clear or direct with. Use yourself as a learning tool for your girls. Encouraging girls to speak directly to each other when their feelings are hurt will teach them a very valuable skill. For example, if you find out a friend has gossiped about you, think about calling her and telling her that you heard that she had said something about you behind your back. Tell her what you heard and tell her that this hurt your feelings. Only then can you begin to role-model the appropriate kinds of open and direct communication with your daughter.

If you see that your daughter is saying mean or hurtful things about another girl, jump on it. Tell her that she said some things that sounded pretty nasty, and that if those things were said about you, it would hurt. If you pay attention to the meanness or nasti-ness you see in yourself or your kids’ words, you can begin to change the bullying behavior that harms relationships.

Use this time to share your own stories with your children about gossip and rumors, and how this may have hurt you, or how